Plan your event at Aesop’s Playhouse

Our big-top amphitheater is a popular place for fairy-tale weddings and other private events.

The most colorful place in the East Bay to enjoy children’s community theater is at Aesop’s Playhouse, Fairyland’s exciting main stage. From June through October, our talented cast brings stories from around the world to life. 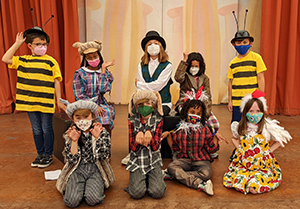 The Rabbit and the Rooster - premieres June 12

Two “tails” make this play a perfect duet! Pairing two stories that are shared in many cultures from around the world, our cast tells the tale of a clever Rooster and Rabbit as they try to go it alone. They soon discover that they depend on all of the earth’s critters, from the biggest to the smallest, to succeed. 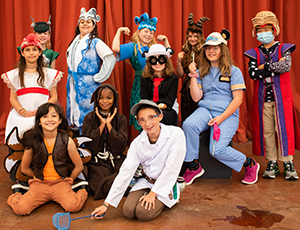 Rabbit on the Moon - premieres June 18

When a stranger comes to the village seeking help, all of the animals who live in the village are too concerned with their own well-being to lend a helping hand. When wicked sprites put the stranger in real peril, Rabbit alone puts herself in danger to save him and is rewarded for her bravery and kindness. This retelling of a beloved Japanese fairytale, teaches us the importance of helping others. 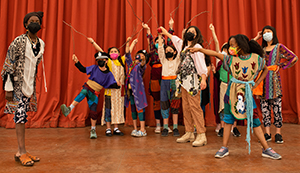 Journey with Joha as he meets a wacky cast of characters and searches for his missing donkeys. This combination of trickster tales celebrate the folly of the wise and the wisdom of the foolish.

Youth Theatre participants receive over 50 hours of performing arts training with professional artists and educators, and will portray characters from folklore and children’s literature in stage productions at the park, at community events, parades, and during visits to senior centers and schools.

Cost is just $400 for the year, and full and partial scholarships are available. Meetings will begin in March. Our program is outdoors and all participants will wear masks until public health guidelines allow us to meet otherwise.

Since 1957, Fairyland has been encouraging children to create their own live theater in the park. Starting with teenage Storybook Hosts in ’57, and becoming the Fairyland Personalities in 1960, the program evolved into The Children’s Theater program and has been lead by Dr. Doyle Ott since 2008. In the theater program, children ages 8 - 11 portray characters from world folklore and Children’s literature in stage productions. They also make outside appearances representing the park at community events and parades. Auditions for the Children’s Theater Program are held once a year in January/February. Find out about the audition process.

Aesop’s Playhouse accommodates over 200 people in festival seating and was funded entirely by Oakland’s Measure DD, a $198.25 million bond measure passed by voters in 2002. Oakland-based Ace Architects designed the structure; Scientific Art Studio of Richmond created the fanciful sculptures of Aesop and his characters.

In addition to our own children’s theater, our playhouse has hosted the Bay Area Children’s Theatre, Oakland School for the Arts, the Pacific Boychoir, the Oakland Ballet Company, popular characters from KQED, and a host of young performers from local schools and community arts groups.